It’s our THIRD installment of Tutorial Thursday, having previously shared All About Apples and Spaghetti Squash.We love doing this series, especially because it’s an excuse to learn new things and enjoy yummy eats every week. Well this week we’re going to be eating a LOT of… Yes! It’s that time of year – pumpkins are here!

How do you prepare this winter squash? What can you do with it once you’ve cooked it? Which varieties are better for sweet or savory? All these questions and more will be answered today!

Like all squashes, pumpkins do originate in North America. Unlike other squashes, however, pumpkin has made its way around the world and now features in multiple cuisines from Italian, to India, to Thai, to Japanese, to East Africa. Pumpkins are unique in the vegetable world due to their large hollow cavities, regular, round shape, and bright orange color. They’re uniquely suited to the practice of Jack o’Lantern carving. They’re also frequently featured in folklore as well. What large, hollow vegetable did Cinderella ride in to the ball? A pumpkin, of course!

But for our purpose here, we praise the pumpkin for its versatility and flavor as we teach you to cook and eat pumpkin!

You could probably guess that pumpkins are chock full of great nutrients, but I think you’d be surprised to find out how much. For example, per one cup of pumpkin puree, you’re getting 2.5 times your daily requirement of Vitamin A. It’s also a great source of Vitamin C, Vitamin E, Riboflavin, Potassium, Copper and Manganese.

Once October rolls around, suddenly pumpkins are plentiful and everywhere! Try local farmers’ markets or visit a local farm that allows you to pick your own. We got all of ours for this post from a nearby nursery that is reselling farm’s pumpkins and we have posted about picking our own here!

Although not on the dirty dozen list, pumpkins, like all winter squash, do absorb pesticides from the soil. If you intend to eat the pumpkin, organic is certainly preferred. If you have trouble finding whole cooking pumpkins organic, you will likely be able to find organic canned pumpkin in major grocery chains. If you’re going to carve or use your pumpkins as decoration, than conventional will certainly be fine.

With thick protective skin, pumpkins are excellent keepers and will be fine at room temperature for a month or more. Once cut, the timer begins. While some people will tell you that it will be fine to use a month old Jack O’Lantern from your front porch for pumpkin recipes in November, I certainly don’t recommend that, particular if you live south of, say, New York where it can still be very warm in October. We cook up our Halloween pumpkins within 36 hours of cutting to be safe. If you make pumpkin puree, store your leftovers in an airtight container in the refrigerator, and keep it only for a week or two. Because of it’s popularity, pumpkin varieties are numerous. They range from tiny one pounders to extremely gigantic varieties (This year, the world record was set at 2097 pounds.), and vary in color from green (Blue Doll) to white (Casper) to yellow (Sunlight) to orange (Jack o’Lantern) to red (Red Warty Thing). Some will even have stripes and other special features, our favorite being the peanut pumpkin that features light brown bumps all over the skin). They’re also cultivated for flavor purposes, changing the sweetness and other characteristics. If you’re going to be eating your pumpkin, look for varieties labelled “pie pumpkins” because they will be bred to be the best tasting squashes. Some of our favorites are pictured above, going clockwise starting with the big guy:

Peanut Pumpkin – this was our family’s favorite, it’s got a great sweet flavor and is extremely fun to look at!

Pokemon Pumpkin – we have 3 boys and it’s named POKEMON.

Blue Hubbard Squash – although technically not a pumpkin, this versatile squash has bright yellow orange inner flesh and has sweet, fine-grained, flesh that is great for baking, pies, and soup.

Orange-mon Pumpkin – a variation on Pokemon, this variety is similar to sugar pumpkins in it’s versatility.

The only tools you’ll need for pumpkin are a sharp knife to slice it open and a spoon to scoop out the seeds! Although a variety of knives could do the job, we recommend a good chef’s knife using a knife sharpener before use. If you’ll be cutting the flesh instead of roasting in the skin you’ll also need a vegetable peeler. Although counter intuitive, you’re less likely to injure yourself with a sharp knife than having to put too much leverage into cutting with a dull knife. 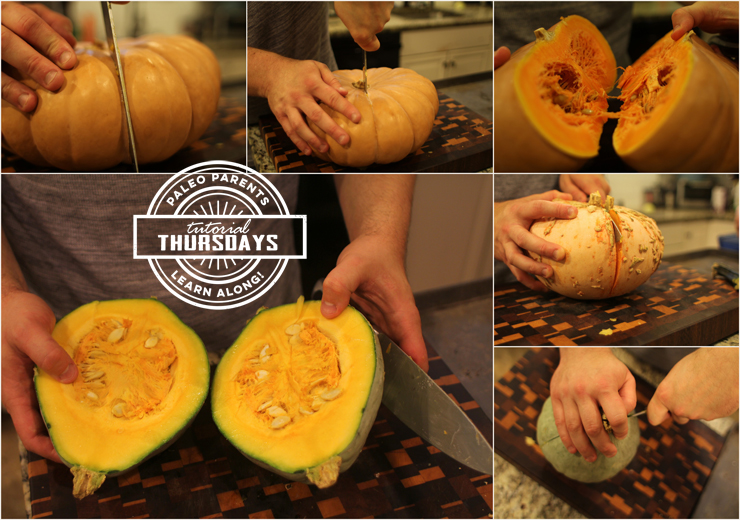 In a bit, I’m going to teach you how to roast your own pumpkins and puree them, but many people are simply not going to do that. First of all, I assure you that roasting your own isn’t hard at all (and much more economical), but if you want to go for the can, let me offer some advice. Try to look for organic, which should be easily available in stores or online. And if Biphenol A is a concern for you, Pacific foods makes a pumpkin puree in a carton instead.

Also of concern is the fact that many canned pumpkins will contain mostly other winter squashes, like butternut, instead of pumpkin. If true pumpkin flavor is what you’re really after, roasting your own is the way to go.

We like to roast pumpkin, both to prepare it to be pureed and as a side dish on its own. There are two ways to do this:

1 – First is to simply cut it in half and roast it whole. Although much easier to set up, but can take up to an hour to cook and doesn’t fully allow the flesh to caramelize since it is still in it’s skin. This method is ideal for pureeing and using in savory applications.

2 – The second recommended method is to peel the skin before you cook it using a vegetable peeler and then cube the pumpkin flesh. This will maximize caramelization and cut down on cooking time; it creates more natural sweetness, allowing the natural sugars to be enhanced. We prefer this method for baked goods or even serving the winter squash as a side dish.

Because of both the starch content and natural sweetness, pumpkin is an excellent, versatile addition to many savory and sweet dishes. It can even be used in place of tomatoes and bananas in dishes ranging from curries to waffles to muffins! For example, as Russ describes here, his Beef Randang is amazing with pumpkin instead of peppers!

Pumpkin puree is also a great substitute for almond or other nut butters. Almond butter per 100 g has 650 calories where pumpkin only has 20 calories. So if you’re into pumpkin, using it in some almond butter treats and feel less guilty about it!

How to Cook a Pumpkin!

To start, tear off or cut off the stem of your pumpkin. You may need to make a “knotch” in the stem with your knife if it thick and difficult to break with your hand alone. 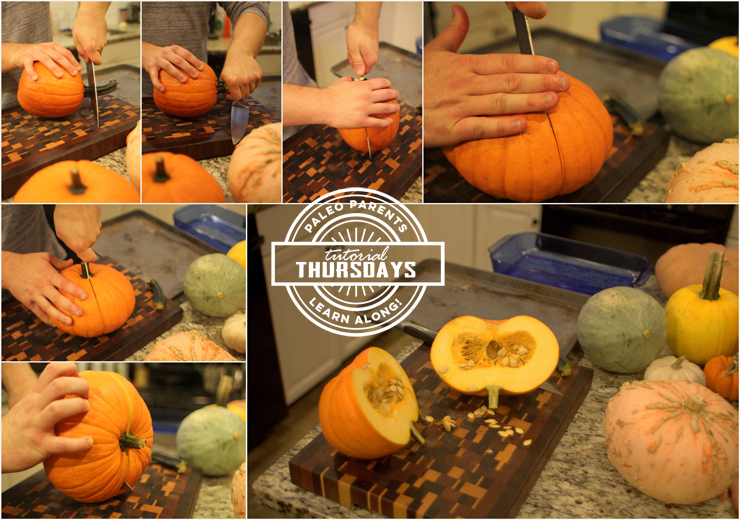 Next, cut your pumpkin in half lengthwise.

Then, Scoop out those seeds with a spoon, but save them! You can roast them later.

If you’re roasting whole, place the pumpkin cut side down in a 1/4″ of water. If roasting cubed, peel and cut your pumpkin into 1″ cubes. Toss with oil, salt, cinnamon and nutmeg on a baking sheet.

If you need to puree for your recipe, scoop out the flesh from your pumpkin halves and puree until smooth.

There are endless ways to use this winter squash. A family favorite, you’ll find quite a few recipes on our site that use it.  In fact, when I talked with Matt about making this week’s tutorial all about pumpkin his response was, “What can we possibly make with pumpkin that we haven’t yet already?!” Don’t fear, Pumpkin Spice Whoopie Pies are here! Born from one of our favorite recipes, Snickerdoodle Whoopie Pies, this is our spin with pumpkin thrown in! We served these to guests earlier this week who proclaimed them to be amazing and each ate several in one sitting… so, make sure you check those out below!

Here’s some of our favorite pumpkin recipes to get you started:

Perfect Pumpkin Seeds (don’t waste all those seeds as you carve and roast pumpkins! our crispy roasted seed recipe is better than popcorn!)

Pumpkin Cupcakes guest by by Yes to Yummy

The Best Pumpkin Pie from The Paleo Mom is one of Stacy’s favorites simply crustless, as custard

Baked Pumpkin Spice Doughnut by Against All Grain

Pumpkin Soup with Prosciutto and Fried Sage from Against All Grain

Ital Stew by The Domestic Man

Pumpkin Fudge by The Coconut Mama

Pumpkin “Cornbread” by Virginia is for Hunter Gatherers

and although it’s not technically pumpkin, this Homemade Pumpkin Pie Spice from The Spunky Coconut is helpful for all things pumpkin!

These are STUPID GOOD. We made them for guests earlier this week and people ate several each! My mom said they were so good she wanted us to make them for her birthday next month! Surprisingly simple and easy, we highly recommend you give these Pumpkin Cookies a whirl. Even better, make them into Whoopie Pies! You can fill them with Pumpkin Butter or the frostings as noted.

Yes, this cookie moster stalked the photo shoot until he could stuff his face. T’was approved. 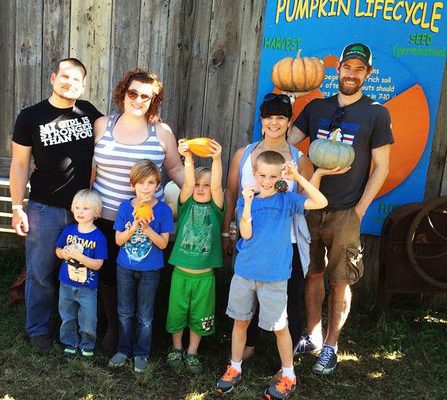 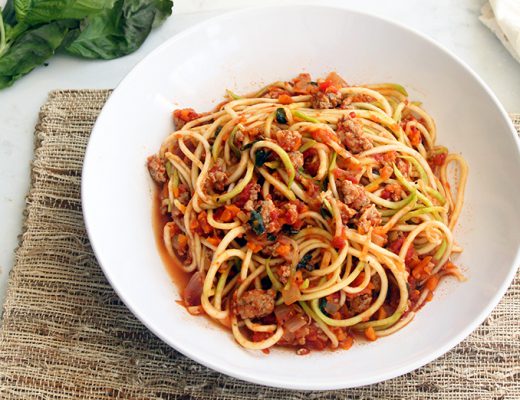 Guest Post: How to Feed a Large Family with Real Food by Eat Your Beets 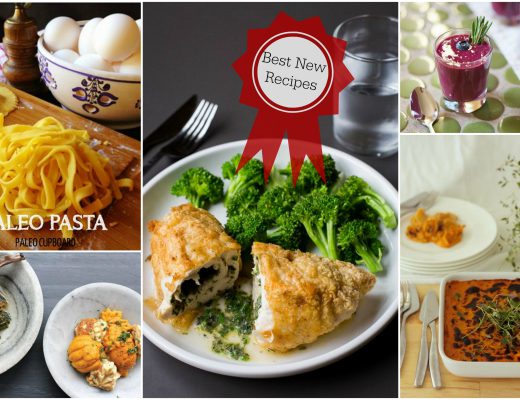 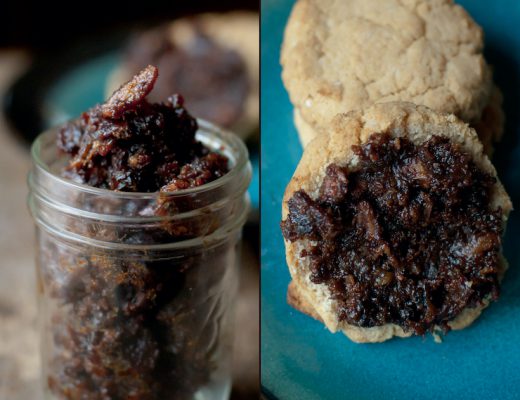 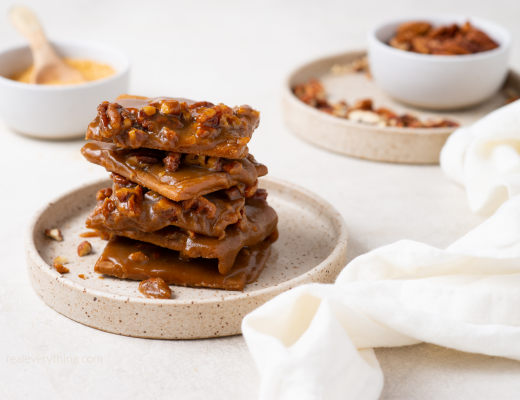 Shop with Stacy Toth for 10% off Beautycounter with codeCHANGEBEAUTY10