Last week, we covered one of our staples, the miraculous cooking fat, lard. This week, we’re continuing our coverage of items you ought to always have around the house. Strangely, this may be the single most asked about food stuff we make (seriously, we have multiple hashtags in social media for Stacy’s love of it!). I think this is pretty ironic, considering how few ingredients there are and simple it is to make. But, in a way, it has its own complications and subtleties that need elucidation. So here we go! By popular demand, the secret ingredient is… 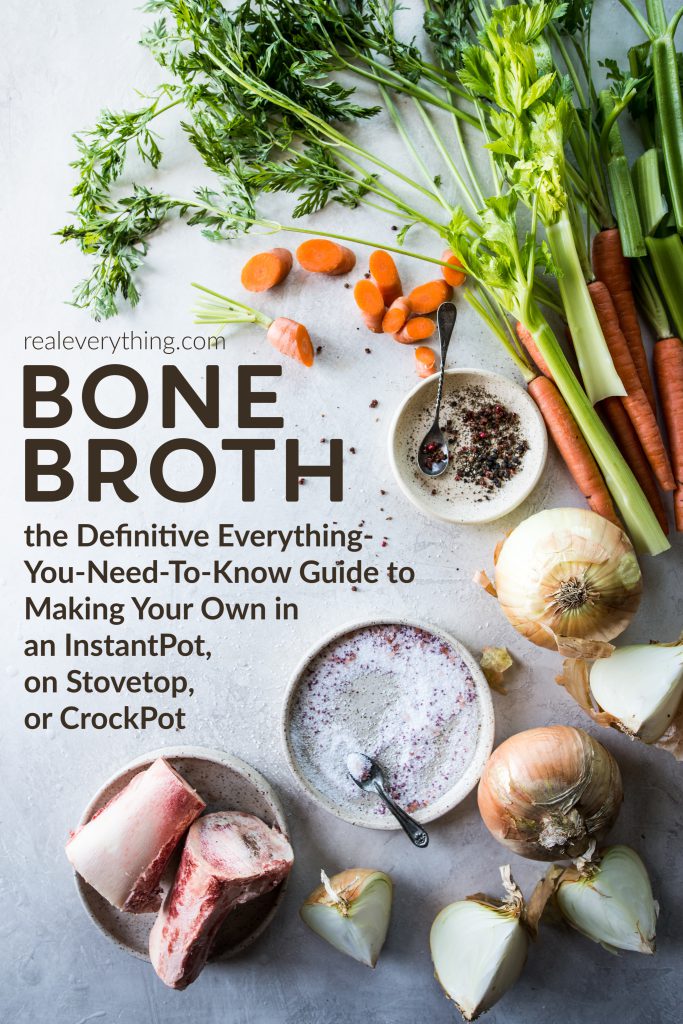 It’s the base of all soups and many sauces, the best way to braise your meat and even enjoyed as a warm beverage in NYC.
No matter what you call it, broth is awesome!

While no one knows when the first soup was made, we’re pretty sure it was as soon as we had a pot to cook it in. After all, one of the earliest cuneiform tablet sets is a series of recipes, including stews and soups, from about 3700 BC. In fact, this person made one of them, and it sounds delicious! Soup was a staple of food in all ancient civilizations from South Asia to the Americas and some famous cultural soups have remained intact to this day. My favorite is black broth, which ancient Spartans made from pork, vinegar and blood (when you cook blood, it turns black). And of course, the most infamous “poor food” of all, gruel, is essentially barley and broth cooked into a porridge.

Why is it that broth is so ubiquitous? Well, it’s an effective way to “stretch” meat to feed more people as well as extend the time you have to eat it. Bacteria doesn’t grow in boiling water, so boiling your meat will give you extra time to eat it. Once civilization began, humans figured out all the ways that broth could be used to feed people, from porridge to soup to braising.

Of late the health benefits of broth have been touted far and wide, spearheaded by the Weston A. Price Foundation, usually in articles beginning with South American proverbs. Now while we firmly believe that broth is awesome and beneficial, I think they may be overstated a bit. Yes all those minerals are in there, like calcium, phosphorus, folate and magnesium, and perhaps, as is often touted, they are in “the most usable form,” but the amounts in a typical serving are not huge.

The health benefits we find most convincing come from the collagen that is contained in bones and joints. The collagen in the bones becomes gelatin in your broth. The main amino acids in gelatin are glycine and proline, both of which are incredibly important to your health. Among other uses, glycine is important in healing wounds, building joints and building muscle and proline helps to clear plaque from arteries. The Paleo Mom goes into more detail here.

Essentially, you need gelatin to be in your best health and the best way to get it is from bones and connective tissue. And that is the best reason to drink some broth!

This is one of those cases where source does not much matter to obtain the health benefits. Bones are only formed one way and there will not be much difference in the stock from a conventionally raised animal and a pasture raised one. If we get our favorite take out meal, Peruvian roasted chicken, you better believe we’ll be making stock from those flavorful roasted bones!

You can make broth or stock from any animal that has bones. While the most common varieties are beef and chicken (at least according to grocery store shelves), you’re welcome to make pork stock, lamb stock, fish stock, or, most prized of all in fancy kitchens, veal stock. And the vegetarians in your life are certainly making vegetable stock, though there will be no gelatin in a vegetable stock.

Each type has it’s own best practices to making it that you should be aware of, which we will address later.

The only tool you’ll need is a pot. We recommend getting a big one! We use a 12 quart one,  but maybe you’d prefer a bigger 20 quart pot like this one. Stainless steel is best for this task and the most ideal ones will have a heavy bottom. Of course lots of people make stock in a slow cooker, pressure cooker, and we are going to try out the InstaPot after it’s opened after Christmas.

We also recommend below using a colander (like these) and big wide mouth mason jars (like these) and a funnel (like this one), but it’s really not rocket science so fancy tools aren’t needed – we promise! 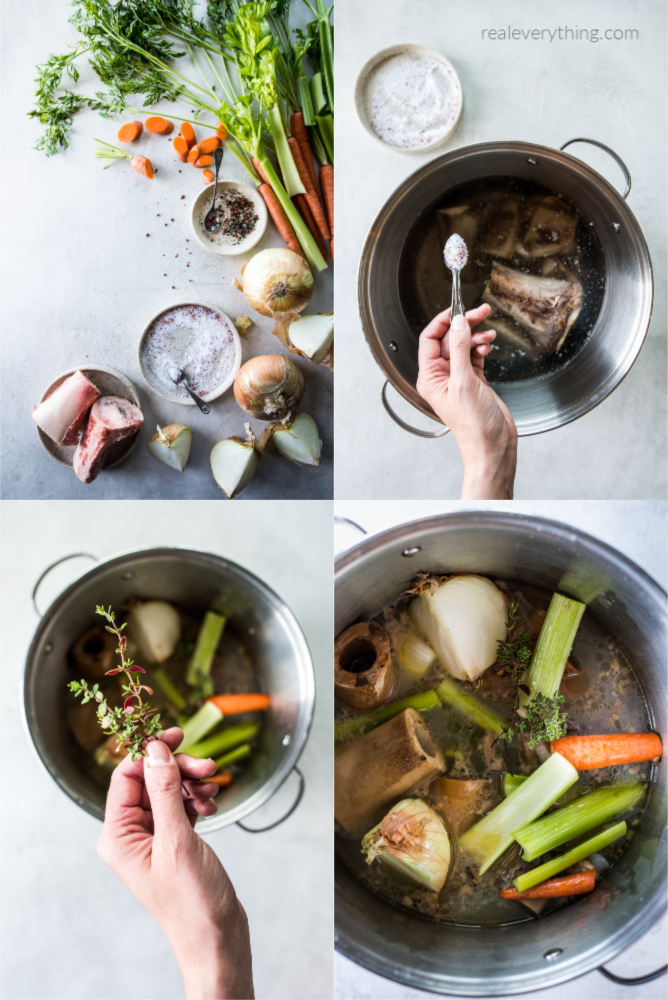 There are many tips to making great broth and here are a few:

This incredibly gelatinous collagen-rich broth was made from pork feet, it’s a SOLID which means lots of gelatin!

How to Make Broth and Stock

The first question you have to ask yourself when making broth or stock is “What bones am I using and what’s been done to them previously?” Like I said, any bones will work, but different circumstances call for different steps. If your bones are previously roasted, throw them in the pot right away. If you have thicker bones like beef bones, lamb bones, or veal bones, you’ll want to roast them first to improve the flavor. Place them on a roasting pan and roast them at 400 degrees for 30 minutes to brown them. Some will tell you to salt and pepper them and, sometimes, coat them in tomato paste. I consider that to be unnecessary. Once roasted, place them in your stock pot.

Add one tablespoon each of salt and whole black peppercorns to the pot. Do not add ground pepper, because you’ll want to strain out the pepper later. Pour in three tablespoons of apple cider vinegar. The acid helps to extract the mineral in the bones and break down the collagen. Cover your bones with water by at least an inch. Some considerations on the amount of water include the fact that some liquid will evaporate and that the more water you have at the end of cooking, the less concentrated your broth will be. In our home we love a concentrated broth, both for it’s dense nutrients as well as rich flavor. You can always add more water when cooking if needed!

Place your pot on the stove at high heat and bring it to a boil uncovered. Cover and reduce the heat. Now we come to the subject of cooking times. The idea here is to cook it long enough to extract as many nutrients as possible without making it turn bitter. This is a different amount of time for each type of bone.

How do you know if you’ve gotten everything out of your bones? If you can pick up the cooked bone and easily crush it in your hand like Gregor Clegane, it’s ready. Personally, I love doing this just for the satisfaction. If your bones are too tough to crumble in the palm of your hand then keep cooking until you can!

Towards the end of cooking, with only an hour or two to go, add your aromatics. Traditionally in Western cuisine, this would be carrots, onion, and celery. I like to add garlic as well. Don’t bother peeling these, as you’ll just be straining them out. I just quarter the onion and break a few carrots and celery in half. Add herbs, if you wish, tied up in cheesecloth for easy removal. The French use a bouquet garni featuring bay leaves, parsley and thyme. Other cultures favor different flavors, of course. Our favorite flavors for broth come from those in Vietnamese pho, where the broth is enhanced with fish sauce, ginger, anise, and cloves (our recipe is in Beyond Bacon).

When done, strain your stock into a bowl through a colander, then pour your stock into your storage container of choice, using a funnel if you have one to avoid a big mess. 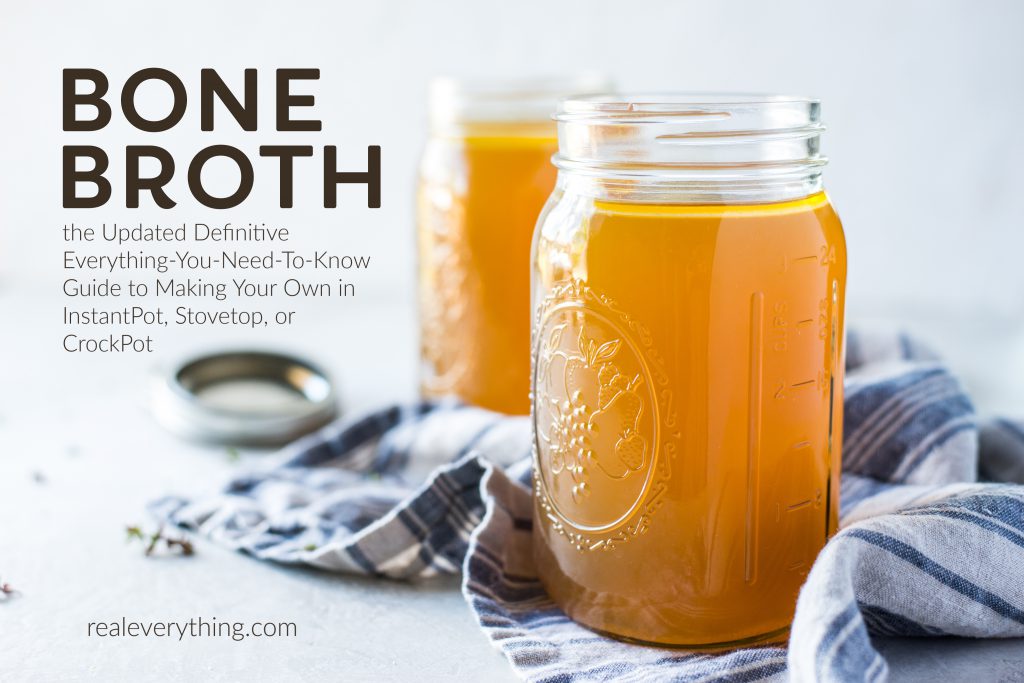 We have quart size mason jars that are used exclusively for broth. The glass means that you can pour into it while hot and the seal is tight and secure so as to make spilling difficult. We try to use our stock within one week of making it to avoid spoiling, although shelf life can be extended if you reboil your stock. It also freezes well (just don’t overfill glass jars or they’ll shatter, which we learned the hard way), but we recommend freezing from cooled refrigerated stock instead of still steaming hot.  You can keep it frozen for months.

How to Use Stock

We use stocks in a number of ways, including the obvious soups and stews. But broth also makes a wonderful flavor addition to sauces, braised meats, and much more! These are some of our favorite recipes to use it!

If you, like us, are still clamoring for information on this epic nutrient-dense food, we highly encourage you watch the following video from AHS 2014. It’s seriously one of the best things, ever. 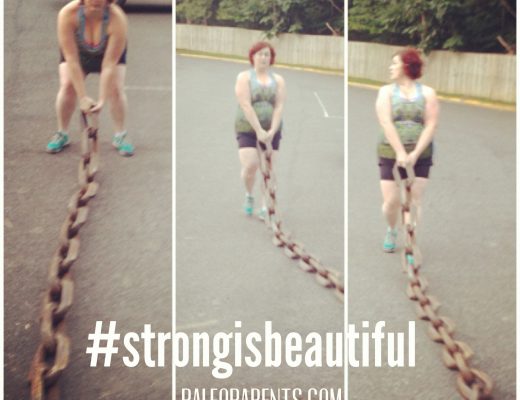 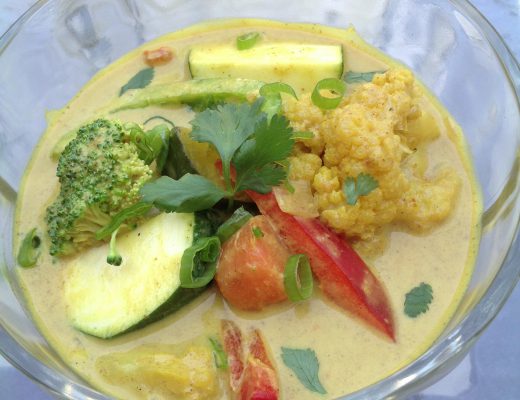