The Whole View, Episode 461: Oats-M-G, Are These Actually Healthy? 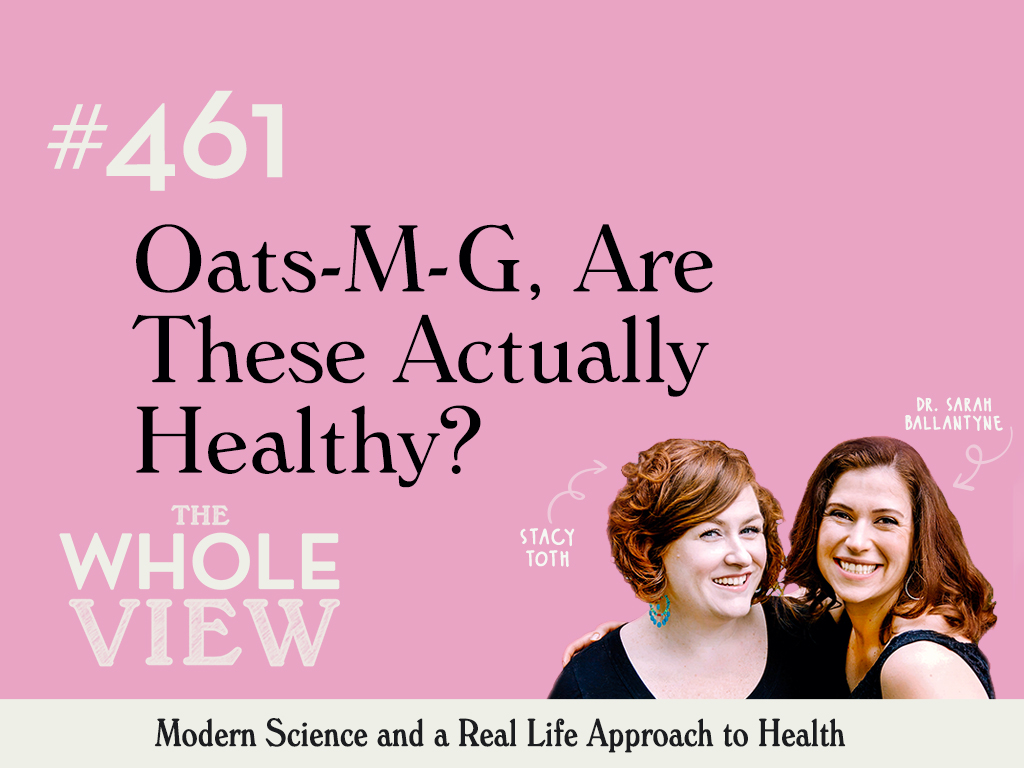 Welcome to episode 461 of The Whole View! This week, Sarah and Stacy revisit the topic of oats and why it’s important to look at foods individually to see how they can fit into a better overall diet. They dive into the science of why oats are often grouped in with wheat and grains as foods to avoid. Lastly, they encourage listeners to gain the confidence needed to experiment with different foods to find what works best for them as individuals.

The Whole View, Episode 461: Oats-M-G, Are These Actually Healthy?

Stacy has mentioned in the past how great she feels when she includes some oats in her diet. She clarified that it’s not something she loads up on daily.

Finding high-quality, gluten-free, and non-glyphosate was a game-changer for her as well.

For years, Stacy and Sarah have talked about how grains were problematic for digestion, proper absorption of nutrients, and gut health. However, it’s important to revisit how we look at food with a scientific approach as often as possible.

Both Stacy and Sarah’s health journeys took a path through the Paleo Diet to a point where they are now very open to experimenting with foods they were not maligned to for a long time.

For Sarah, that means revisiting the science of these foods to get away from the idea of grouping foods together and instead look at the pros and cons of individual foods and how they can fit into an overall healthy diet to empower others to experiment.

Sarah is a self-described Thrive Market junkie, and many of the (non-sponsored) products she and Stacy will be discussing are listed on their site.

They also have a great feature called subscribe and save, where you can save money on products you buy regularly!

Dogma of Paleo and Other Rigid Diets

Stacy shares how much this question resonates with her. She first started on this health journey from guilt and feeding into the dogma of paleo that glorifies some foods and demonizes others. (8:00)

In fact, what qualifies as a “paleo” food will vary from person to person.

It’s okay to lean into foods that make you feel good even if they don’t fit a diet “framework” of what good and bad for you.

For example, it was easy for Sarah to lump oats in with wheat and other grains and not critically evaluate it independently.

Paleo has a very rigid set of rules, and it’s important to Sarah to give listeners the tools and confidence needed to find what works best for them as individuals.

Even if you stray from the framework of a particular diet but still identify with the term Paleo, there’s nothing wrong with that.

What works today might not work two years from now. It’s okay to change to something better suited for what we need in a moment.

Stacy stresses that they are not here to tell you what good, bad, and qualifies under a certain label.

Oats have been very well studied for at least 30 years and have some well-established health benefits. (16:27)

These characteristics are mainly attributed to the high content of oat-specific beta-glucans, which are soluble food fibers.

However, some people don’t do well with oats. This is likely due to gluten cross-contamination.

Gluten is a prolactin that is inflammatory that increases intestinal permeability, and linked to adiposity signals. But avenin, prolamin type lectin, may not be as bad.

Oats are often grouped in with wheat and barley as problematic, but not because oats themselves are a problem.

The avenins in the genus Avena are free of the known CD immunogenic epitopes from wheat, barley, and rye. T cells that recognize avenin-specific epitopes have been found very rarely in CD patients.

In fact, avenins are highly digestible and don’t come out half-digested like gluten often does.

Unlike gliadin peptides, oat peptides are also sensitive to digestion by pepsin, trypsin, and chymotrypsin in the gastrointestinal tract. They are unlikely to have any clinical relevance.

Some cultivars of oats are gluten cross-reactors, meaning that if your body forms antibodies against gluten. But this appears to be a fairly low-frequency cross-reactivity and even not a problem for most people with celiac.

However, oats are often processed on the same wheat, making the potential contamination pretty high.

For example, the U.S. specification for No. 1 oats allows the presence of up to 2% foreign material, which could be all wheat and barley!

So yes, the biggest con of oats is that it’s frequently contaminated with gluten. As we discussed on a recent show, upwards of 55% of people, have at least one gluten sensitivity gene.

Stacy references Oat O’s and Thrive Market (not sponsored on this show!) for reduced risk of cross-contamination and what she personally leans on.

Although oats fare better than other grains, they are nutritionally underwhelming per calorie. (26:50)

That serving of oats does provide an impressive 246% DV for manganese and 40-50% DV for vitamin B1, magnesium, and phosphorous. It also provides 20-30% DV of iron, copper, zinc.

Not too shabby… but not crazy impressive either.

Sarah has been calculating Nutrivore Scores, and oats are the third-highest grain after corn and buckwheat. She adds that this is neither a pro nor a con for oats but shouldn’t really be a “foundational” part of your diet, but rather fit in for added benefits.

Oats and the Microbiome

That same 100-gram serving contains a whopping 10.6 grams of fiber, including being particularly rich in a very special soluble fiber: mixed linkage beta-glucan. (34:31)

This is a highly fermentable fiber that feeds anaerobic microbes in the gut and significantly increases the production of the short-chain fatty acids butyric and propionic acids. Oats contain 3-7% beta-glucan!

Studies show over and over again that beta-glucans from oats significantly increase the growth of very important probiotic strains of Bifidobacterium as well as the Lactobacillus-Enterococcus group.

One study showed that an oat-based diet resulted in higher Bifidobacteria levels than either a barley-based or wheat-based diet supplemented with equivalent amounts of beta-glucan.

In addition, these high levels of beta-glucan appear to be the “magic ingredient” behind oat’s most famous properties, including their cholesterol-lowering effects. They also contribute to the maintenance of normal blood cholesterol levels.

Consumption of beta-glucans from oats and barley as part of a meal (4 g/30 g carbohydrates) contributes to reducing the blood glucose rise after that meal (EU 432/2012).

Oat beta-glucan (3 g/day) has been shown to actively lower/reduce blood cholesterol. High cholesterol is a risk factor in the development of coronary heart disease (EU 1160/2011).

In addition, oat fibers increase the fecal bulk, which contributes to a normal stool and positively impacts the functioning of the microbiome.

Their unique composition contributes some special benefits to gut health compared to other whole grains.

This is in contrast to wheat, in which the vast majority consists of gluten.

Starch (about 60% of the total dry weight) is a major component of the oat grain. The amylopectin: amylose ratio is about 3, and the digestibility of oat starch is about 100%.

This results in a gradual supply of glucose to the intestine, which maintains a long feeling of satiety. As a result, whole grain oat foods have a low glycemic index (GI), which is advantageous in cases of diabetes and obesity.

Compared to other cereals, oat grains have a relatively high oil content of on average 7% oil, but some varieties can have up to 18%:

So, Which Oats Are Best?

Sprouted is best! Sprouting happens the seed is trying to turn itself into a plant. However, they are tough to sprout at home unless you buy unkilned oat groats. (48:35)

Studies have examined the nutritional, bioactive properties, and key enzymatic activities in sprouted oat powder and compared with those of oat grain powder (control).

Since 2009 (EC 41/2009) and 2013 (FDA), oat products may be sold as gluten-free in several countries provided a gluten contamination level below 20 ppm. Note: 20ppm may still be too high for celiac or gluten allergy!

Interestingly, when it comes to oats, the size of the flakes appears to make a difference in how the gut microbiota are affected.

Sarah recommends One Degree brands for the best-sprouted oats (not sponsored! Just a Sarah-approved favorite).

Personally, Stacy and Sarah have both Old Fashion and Steel Cut oats currently in their pantries. Sarah recommends using an instant pot as well!

Sarah’s ideal recipe is 2 cups steel cut oats, 5-6 Cups of water (depending on how thick you like your porridge), and 1/2 a teaspoon of salt (scale up or down as desires).

In Instapot, cook for 4 minutes on high pressure and then let the pressure naturally decline. Add flavoring as needed, such as maple syrup to slightly sweeten.

Stacy also recommends trying this pumpkin oatmeal recipe, which has always been a crowd-pleaser.

Sarah recommends starting by utilizing a food journal to see if you’re reaching your nutrient targets for the day.

If you are, first cut out the food from your diet for at least two weeks, even including trace amounts.

This ensures you’re testing your actual reaction and not the reaction you’re currently having while already consuming the food. This helps you isolate and identify.

Next, pick a day to challenge when you’re feeling good, slept well, not stressed, and not eating anything else out of the ordinary.

If you’re worried about an allergy response, make sure you go slow since they can get really big very fast.

If you’re not sure if something was a reaction (mild reactions can be tough), give yourself a few days to reset, and then try again to see if you have the same experience.

If you’re thinking about experimenting with oats, Sarah recommends buying sprouted oats (which reduces anti-nutrient content) that are certified gluten-free.

Also, oats are way less likely to be tolerated by people with celiac disease or anyone who has tested positive for wheat/gluten or oats on a food allergy/intolerance screen in the past.

Stacy’s philosophy is all about variety and introducing foods to develop a palate. And the more science we look at, the more we can emphasize foods we know are beneficial to our gut and health overall.

It’s important not to emphasize “yes” and “no” in terms of food, but instead look at each food as an individual in terms of a healthy diet overall.

Identifying your triggers is very important, and knowing that not every food will work for every person.

Be sure to head over to Patreon for bonus content on how Stacy and Sarah really feel about this topic and more! Your subscription supports this show and gets your questions first in line.

Thank you for your great question, Anna, and thank you, listeners, for joining us! We will see you next week. 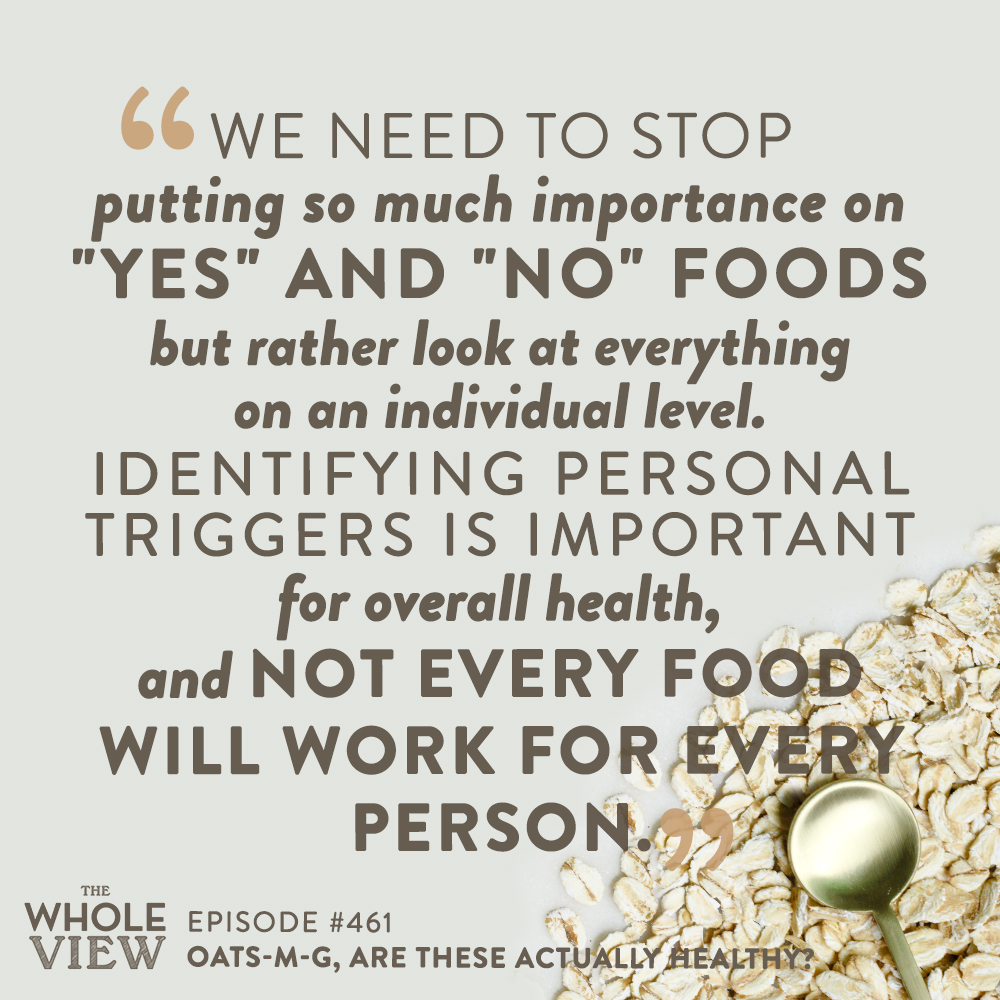 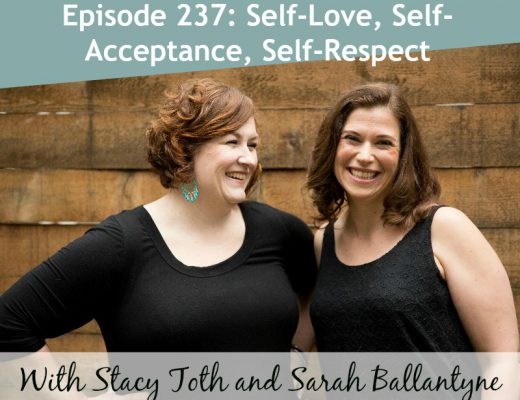 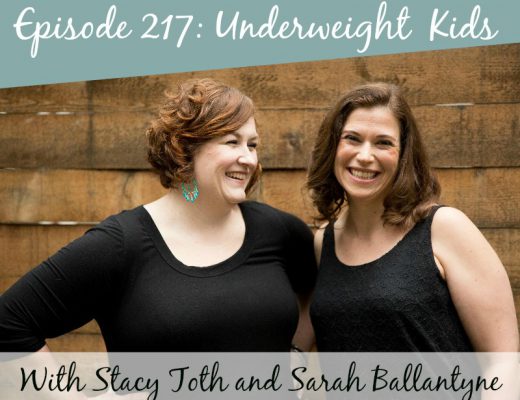 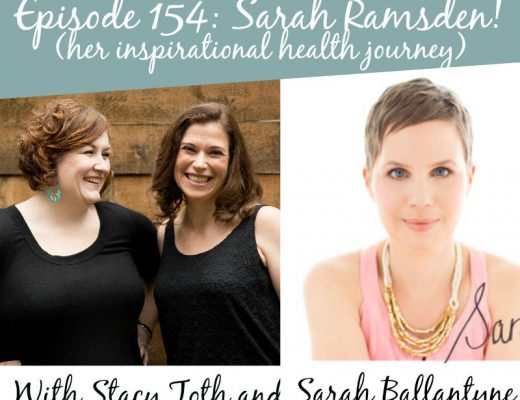