Guest Post: From Wheat to Meat: How the Paleo Parents Have Influenced What We Eat

Michelle is a former coworker of Stacy’s that we have recently reconnected with (for those concerned, you are correct in assuming that Matt has never met another human being).  After nearly a decade of knowing one another, our lives have changed quite dramatically, but in the same wonderful direction.  Now with three boys each of our own, plus one extra girl for Michelle, we try to find time to convince the kids they want a playdate so that we can chat and catch-up.  Even more exciting, Michelle’s husband has recently become a SAHD!

While Michelle & family are not living en entirely Paleo lifestyle, she illustrates a very important point: being conscious about your dietary choices in any and every way you are able and comfortable makes a difference.  Her step children eat very differently away from her home and were raised on food she wouldn’t have chosen to feed them, given the struggles she faces she still manages to find ways to implement changes in her life without necessarily doing it entirely.  Leave it to a working mom of 4 to find a strategic way to reap some of the important health benefits while still making it work within her life.

I met Stacy in 2002.  Stacy and I worked together and we often hung out on weekends with mutual friends spending our nights consuming pizza, drinking large quantities of alcohol and playing poker until the wee morning hours.  Our small organization was gobbled up by huge entity in 2006 and we each parted our separate ways to go on to bigger and better things. 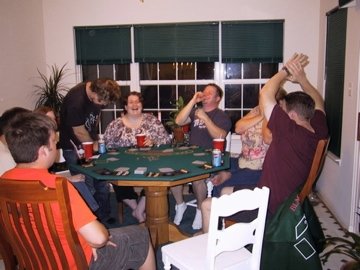 Fast forward to 2010.  With the miracle of Facebook, we were reunited – Stacy now had 3 growing boys — I had 3 stepchildren and my first son in utero.  What a better way to meet up for the first time, than by taking the brood to Great Country Farms for a potato pick!  I really didn’t quite understand why they had brought their own food and weren’t eating the delicious glutinous pancakes being served, but didn’t think too much of it.  We had a blast and my first time at GCF was enough to convince myself that next year, I would need to get a family membership. 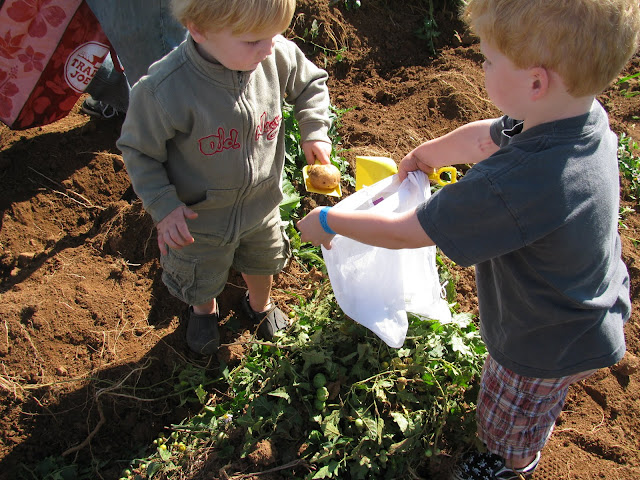 After GCF, I began discovering Stacy and Matt’s feeds, and I was slowly being introduced to this strange thing they were doing called “Paleo”.  I got my full on introduction to it when I was put on bed rest for 10 weeks while I was pregnant with my son.  On top of not being able to move for 3 months, I was also diagnosed with gestational diabetes.  I was instructed to eat a strict diet of fresh fruits and veggies, carbs with a low glycemic index, and low fat high protein meats.  Stacy soon arrived at my door with a plethora of Thanksgiving low glycemic, no sugar treats!  Pumpkin mousse, coconut chocolates and several other yummy things that I cannot describe other than the fact they were delicious.  It was the first time I had ever had anything made with almond flour and it made me really curious as to how things could be so incredibly sweet without sugar or (God forbid) Splenda.

I soon trekked over to Stacy’s facebook wall and asked, “Palao question: how do you sweeten items without using artificial sweeteners and still stick to the palao diet? Do you use honey? Stevia?”  Notice my ignorance of Paleo was so great, I didn’t even know how to spell it!  That’s when I heard of “Agave” for the first time and then promptly threw it into my cart during my next Costco run.  Side note: aside from putting it in tea, I have yet to use it for anything else.

Christmas came and went, the countdown to bedrest was over and pretty soon I had a natural delivery (ouch) of a 6 pound, 10 ounce baby boy.  My world as I knew it changed and I was prepared to do anything for this little thing that I called my son.  Stacy, also being a card carrying member of Le Leche League coached me through a difficult first two weeks of nursing.  It was all that time, effort and pain that made me realize that if I was going to put that much work into creating food for my little life, that I wanted it to be the most pure, healthy and toxin free food that I could produce.  After about two weeks, I threw out all forms of plastic bottles (even the BPA-free ones still have toxins) and replaced all my bottles with glass.  I threw out all pacifiers that were not made of silicone and I took to the internet with the speed of light to research anything and everything about organic food, plastics and thanks to Stacy, Paleo.

My interest was again piqued about Paleo when my son at three weeks, began having green stools and intense gas.  Stacy said this was most likely a “food allergy”.  Food allergy for a three week old breast fed baby?  Impossible!  Well, after reading tons and tons of posts, I soon learned that most babies are often allergic to milk proteins from cow’s milk their mothers consume that is then passed on to them through their mother’s milk.  Most modern day doctors refer to this as “colic” and parents are advised that it is a “phase” and after about 3 months of sleepless nights that it will eventually go away and all will be right with the world.  For parents that find this just too unbearable, they can opt to switch to formula (most often soy based) where their infant will avoid the terrors of milk proteins, in exchange for hormone altering levels of soy.  I opted for a third choice: to ditch drinking milk for a while to see what it did to my son.  Within about 48 hours, I had a happy, brown stool baby and I was actually able to get sleep.  The nights of Ben and Jerry’s were over, but it was a small sacrifice knowing my son was feeling better.

That really started getting me thinking… if newborn babies have digestive systems that are not conditioned for cow’s milk, why in the heck would we be able to drink it as adults?  The fact is, we force our bodies to adapt at the expense of our immune systems.  In order to enjoy that Cherry Garcia, my body has to give up something — like fighting pollen.  By inundating our bodies with foreign invaders 24/7, something has got to give.  We develop allergies to pollen, foods and animals; we have a hard time coping with stress and anxiety; we develop diseases that never existed before such as ADHD, autism and diabetes.  And instead of getting to the root cause and treating the problems (change in diet), our Western Way is to medicate, medicate, medicate.  Claritin, Lexapro, Zoloft, Ritalin, insulin, to name a few.

Now I must add, I am NOT “Paleo”.  I enjoy the occasional donut and a glass of ovaltine.  But what Stacy and Matt have done for me is help me to understand a lot more about food and nutrition and what type of warfare we are subjecting our bodies to on a daily basis.  I have read several things about milk and have decided that although I cannot forgo milk completely (it took my son 4 months before he stopped reacting to me drinking milk so I am back on it again), I have made sure that I only drink whole organic milk (the fat is essential in milk to be able to digest it) and I am right now seeking to buy a share of a cow so I can get raw milk.  Raw milk is an entire blog entry in itself, I will not bore you with the details of it here, but I encourage you to read about it.  (Is it a faux pas to do a milk plug on a Paleo site?  Sorry Stacy!)

After my milk research was exhausted, I soon saw another tidbit of information on Stacy’s facebook wall from one of another of her inspired friends: soaking grains.  HUH??  Stacy was trying to explain to some folks that if you are not willing to give up grains altogether, you can eat soaked grains.  Well, what the heck…?  I had never heard of such nonsense in my whole life!  What was soaking some grains going to do for you besides make them soggy?  So I instantly went to my trusty Google and discovered a whole new world of people: grain soakers and sprouters!  My gosh, this was interesting stuff.

This is what I learned (and this is in my own words, so I hope I understood this right): plants such as wheat have innate toxins in them.  These toxins serve as defense mechanisms so that animals do not eat them at certain times.  The toxins are almost completely gone once the grain is ready to sprout – at that time, they are less toxic to eat.  Although I didn’t actually read this part, I deduced that grains have adapted themselves much like the concept of fruit – fruit is enticing so animals will eat it, travel, expel the seeds and the fruit then gets to grow a new plant in a new location.  So, if we soak our grains and allow them to sprout before we consume them, the toxins are then gone and do not cause as much gut irritation or digestive issues such as gas and stomach cramping.  Amazing stuff!

Armed with the knowledge that milk and grains are basically killing society, I now shop a lot more wisely.  Although I have not eliminated these two items from mine and my family’s diet completely, I do drastically cut down on them in the house.  We have joined an organic CSA and often have 2 or 3 vegetables with dinner and no “carb” with our meat.  HFCS is virtually gone from our pantry, as well as plastic containers and cans (cans contain BPA).  Instead of cereal or pancakes for breakfast, we eat a lot more cage free organic eggs and bacon.  The few times I do make pancakes, I use coconut oil (another Stacy inspiration) and use whole wheat flour.  “Snacks” are a four letter word – I instead offer fruit and nuts.  I find that things will occasionally migrate back into the house (Gatorade showed up today), but I just keep reminding my family of why those types of things are bad for us and why different options are better.

So, to the Paleo Parents: we thank you for your steadfast example of how it is possible to raise a clan of ravenous boys on nothing but what nature intended.  I look forward to continuing this journey with you all. 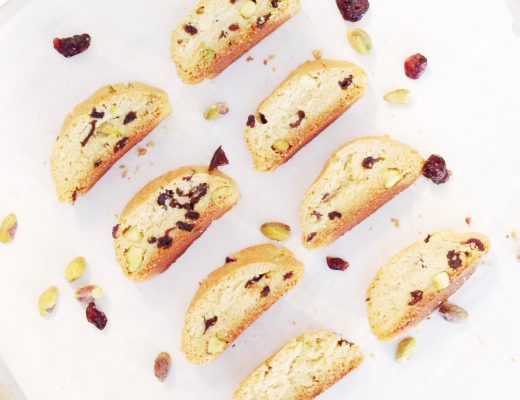 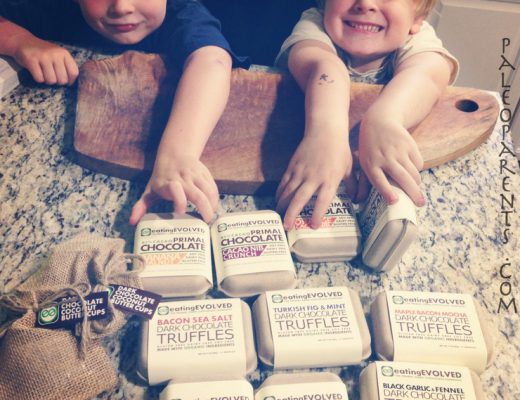 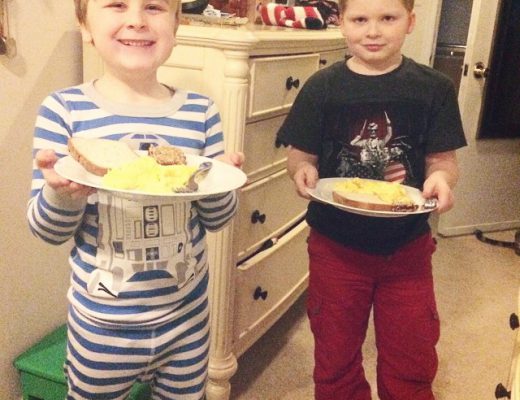 Weekend Wrap Up, 3/8: What We TOOK AWAY From Our Boys And What They GAVE US In Return!