Developing the concept for Beyond Bacon, creating and testing the recipes, writing and editing the content, photographing the food, and crossing every ‘t’ and dotting every ‘i’ until Beyond Bacon shined from cover to cover has been our whole world for 10 months.

When early review copies of Beyond Bacon hit our doorstep, and the doorstep of others (here, here and here), it felt surreal that the book was finally in hardbound form. However, it wasn’t until we saw the crowds at the Red Apron on Friday night that we felt we could truly celebrate the release of our lard-loving baby!

After attending the release parties for both Make it Paleo and Gather by our pals Bill and Hayley, Stacy really thought it important to organize and throw a release party of our own for our book. After all, what better way to celebrate your accomplishments is there than a “Me Party”?

This photo by Bill of PrimalPalate perfectly captures the spirit of the party… see us, upper lefthand corner. And uh, that’d be the long line crowding inside the building everywhere else.

We joked that we’d be lucky if we could get our parents to come. But the reaction to this idea was completely overwhelming! Thanks to our close friends and supporters, our weekend was one that we will never forget!

The most amazing thing that happened this weekend is that we convinced our far flung friends (and weblebrities) to actually come out to see us! Sarah and George (see tattoos in the backseat) made a special trek to the Virginia to party pork style, and kept things exciting around our house. Can you believe that we’re coming up on the one year anniversary of The Paleo View (August 16th) and this is the first time that we’ve met Sarah in person? It was a long over due meeting, but we found that we love Sarah even more in person that we do over Skype!

Then Bill and Hayley and Russ from The Domestic Man joined in on the fun at the Paleo Parents household.

Our amazing team even helped us assemble the treats for the party! Russ braved sticky in order to help us wrap dates in bacon and Bill and Hayley made their infamous bacon cookies!

After the food was prepared, the lard crew was tatted up and shipped over to the Red Apron.

When we arrived at the party, we were truly taken aback by the crowds! The shop estimated around 225 people in attendance (vs. our planned 120). We had no idea so many people were interested in us! It was such a joy to see all this enthusiasm. We hope the event lived up to everyone’s expectations!

Admittedly, it was most entirely because of our famous friends. Especially George. Are you aware that ladies love cool G? Several people even asked George to sign their copy of Beyond Bacon. George replied, “Do you know how much trouble I’ll be in if Stacy catches me signing her book before she does?” He’s a smart cookie that George…

We tried not to keep folks waiting for long, but we signed books for 3 hours straight (at a 2 hour party). The line was long, but the roaming food trays and tight quarters for social interaction with some of the coolest cats in paleo seemed to keep everyone happy as they waited.

In between meeting all of our lovely Beyond Bacon fans, we did steal a little time to enjoy the AMAZING paleo food made by one of the best DC chefs, Nathan Anda! Seriously, I had people telling me they liked the head cheese and the lamb belly was absolutely unbelievable ♥

And this is just naming some of the main items that were served by the amazing butcher shop and restaurant that serves only local and humanely raised meats – Red Apron!

The sea of guests continued throughout the party, and we had a blast meeting so many wonderful people, and hanging with old friends too!

Super sweet Heather from Va is for Hunter Gatherers might run off with Sarah without me, those two are a perfect pair!

For more awesome pictures from the weekend, be sure to use the hashtag #beyondbacon to see photos from folks who attended the party. Be sure to also check out and follow Sarah, George, Bill and Hayley, Russ, Brent & Heather, Lea, Molly, Mike, Aimee, Sima and of course Red Apron Butcher.

Sarah already posted a recap of her visit on her site, and we also posted these Blueberry Breakfast Cookies that we made for our guests. But, here are some of our absolute favorites photos that Bill shared from the party on Facebook (we highly recommend you click the link for more).

The house got packed quickly, but the food and close quarters brought everyone together for good conversation & mingling!

Speaking of food… Red Apron made all of the dishes above completely paleo, while we brought the desserts.

The Best Brownies, Maple Lard Scones, Harvest Muffins (from Beyond Bacon) and Infamous Bacon Cookies were only some of the treats!

Before the party we branded our friends with these adorable pig tattoos, from WhitneyJane on Etsy.
Hay makes the perfect model ♥

The night didn’t feel complete until our friends Mike & Molly arrived. I say friends because that’s what they’ve become first and foremost. But, Mike is our farmer and Molly is his talented photographer wife who took the photos of happy pastured pigs for Beyond Bacon. They nearly missed the party because a bull escaped as they were trying to leave Mount Vernon Farm!

Although we weren’t able to fully “party” with everyone since we were busy signing books the whole time, we are so grateful for photos like these that show us people were having a great time.  Pictured: Aimee Buxton (photographer extraordinaire), Sima (crazy awesome yoga lady) and Hayley.

Thank you again so much everyone for helping us make the release of Beyond Bacon so memorable! Please continue to share your photos and feedback on the book by using the hashtag #beyondbacon, emailing reviews to the paleoparentsteam, and leaving your reviews on Amazon, Barnes&Noble, and Goodreads.

A special note of thanks to George Bryant, who is secretly a big softy. He stayed with us for five days and so endeared himself to the boys that he was being called “Uncle George” by the time he boarded the plane. If you missed the zillions of photos on Instagram, it’s worth checking out; from a video of George somersaulting off the diving-board in our neighborhood pool to the food we cooked together, we shared it all there! We also recorded a podcast together, standing awkwardly on the same treadmill desk giggling and mocking each other for an hour, so make sure to catch this week’s The Paleo View!

yes, the boys choose the “Curious George” series for George to read to them before bed… say it all together now, “awww” 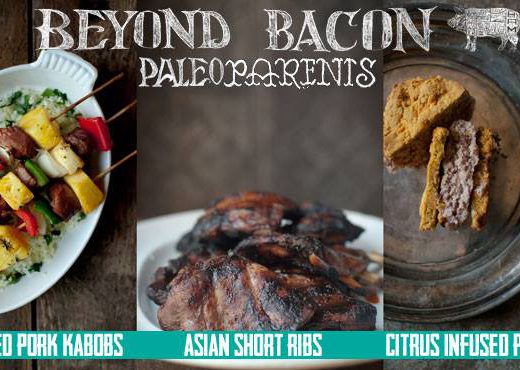 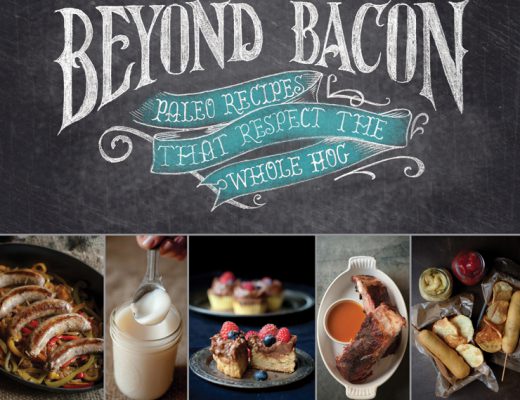 Giving Away 5 Early Review Copies of Beyond Bacon! 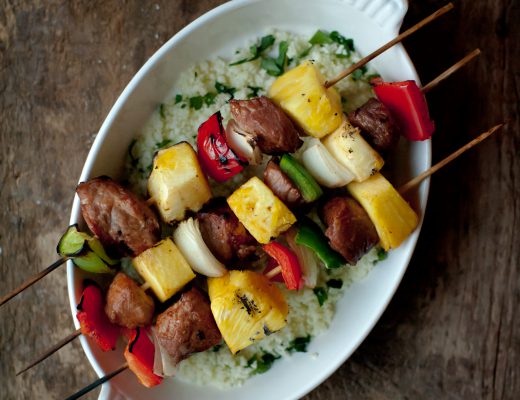