Last week we brought you our first Tutorial Thursday, All About Apples. We’re so happy you all enjoyed it! Not only because it was a ton of work (*cough*notkidding*cough*) but because it was a lot of fun for us. We learned a ton writing it and wanted to be able to justify continuing the series. And, thanks to your positive feedback, we will happily do so! Today’s topic is… 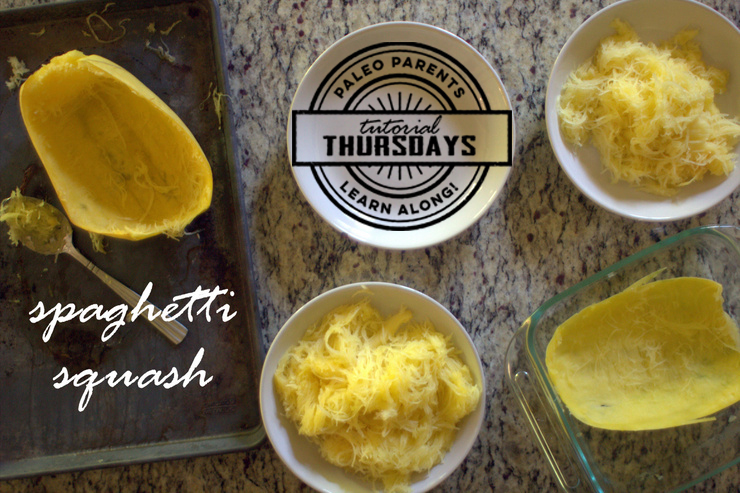 Yes! That popular noodle replacer is next in the series!

How do you prepare this tasty squash? What can you do with it once you’ve cooked it? Will it explode in the oven? All these questions and more will be answered today!

As you likely learned in third grade, squash was one of the three staple crops of Native America along with corn and beans. Back then your typical squash didn’t have the stringy flesh of the spaghetti squash. While no one is certain how this particular cultivar came into existence, it is known to have originated in China and introduced back into the US in the 1930s.

Also known as “vegetable spaghetti,” it didn’t gain popularity until the 1980s and has continued to increase in popularity as a more nutrient dense alternative to pasta. Unfortunately, while it is popular in America and found in conventional grocers in the fall months, it’s less popular in Europe and practically unknown elsewhere. We frequently hear from Australians who have never seen one.

Now a typical spaghetti squash weighs a pound or two, but doesn’t feed like a pound or two of pasta. For our family of 5, we usually cook two and eat at least one and a half for a dinner.

Compared to regular pasta, spaghetti squash has a distinct nutritional edge. Per cup of cooked noodles (or “noodles”), squash has 42 calories to 221 for pasta, and 10 grams of carbs instead of 43. Additionally, the squash contains a variety of nutrients such as folate, Vitamin C and various B vitamins.

Winter squash such as spaghetti squash are not one of the “dirty dozen” foods that are most highly contaminated with pesticides. Hard rind or shelled fruits and veggies usually keep out any contaminants, so purchasing organic is a personal choice.  If available to you, it would be best to buy organic spaghetti squash – we buy ours this time of year at farmer’s markets and they last for months!

Before you cook it, spaghetti squash is excellent at keeping fresh in a room temperature environment. We keep ours in a basket on a shelf for months (with onions and potatoes) before use. Cooked squash noodles can be kept for up to about a week in the refrigerator.

Similar in type, but not texture or flavor, are other winter squash like pumpkin, acorn squash or butternut squash. Spaghetti squash is milder in flavor compared to these varieties. There are also two different forms of spaghetti squash: the typical white-yellow squash and the much more yellow-orange type. The orange type is higher in beta-carotene and, some say, slightly sweeter in flavor.

What you want to avoid is squash that is more greenish in color, as those are the ones that are not yet ripe.

If the squash isn’t available to you, try using zucchini sliced in a spiralizer as the noodles in your dish.

The only tools you’ll need for spaghetti squash are a sharp knife to slice it open and a spoon to scoop out the seeds! Although a variety of knives could do the job, we recommend a good chef’s knife using a knife sharpener before use. Although counter intuitive, you’re less likely to injure yourself with a sharp knife than having to put too much leverage into cutting with a dull knife.

Some people will tell you that you can roast or microwave your spaghetti squash whole in the skin. Do not do this! Not only will doing this double your cook time, but it’s a recipe for a big mess like this person’s oven and this person’s microwave discovered. This is due to the steam created in the cooking process filling the cavity of the squash with no place to escape. Some people will tell you you can poke it with a fork, but why bother with that when you have to cut into it eventually anyway.

Also, do not be fooled: it is not necessary or helpful to rub the squash with salt, pepper or fat like this person or this person did before cooking. You’ll have an opportunity for that after the squash is cooked and the strands are removed. In fact, seasoning the strands separately will allow for a more even distribution.

The actual method for preparing spaghetti squash is actually very simple and does not need any fancy preparation!

So there are two ways to cook a spaghetti squash that we recommend, both equally valid: microwaving and roasting. For pasta-like dishes, such as Spaghetti alla Carbonara, we recommend roasting at 350 degrees because your noodles will be slightly drier. For other uses, such as our Eggs in a Nest from Real Life Paleo, microwaving is a fine and convenient alternative that will put dinner on your table in under 15 minutes!

How to Cook a Spaghetti Squash!

With a very sharp knife, slice off the ends of the squash. Then, cut your squash in half lengthwise, as close to evenly as possible. Scoop out the seeds with a spoon. Save them! You can roast them like pumpkin seeds.

If roasting, fill a rimmed baking sheet with a small amount of water (just enough to cover the bottom). Do the same in a microwave safe Pyrex if microwaving. Place your squash cut side down inside. Roast for about 30 minutes or microwave for 12, until your squash is easily pierced through with a fork. Once slightly cooled (still warm, but you don’t want to burn your fingers when touching it), scoop out your noodles with a spoon or fork! They should easily separate from the skin and appear stringy. If the squash doesn’t easily separate then it’s not cooked through all the way yet. There are endless ways to use this winter squash. A family favorite, you’ll find quite a few recipes on our site that use it.  Which is why when we made the squash to photograph the tutorial we ended up making TWO bonus recipes with this tutorial, Egg Foo Young and Chicken Noodle Soup, below! If you use our techniques for preparing your spaghetti squash (whichever works best for you) we are sure you’ll love the recipes below using this autumnal healthful vegetable!

Here’s some of our favorite spaghetti squash recipes to get you started:

Spaghetti Squash with Sage and Brown Butter by The Paleo Mom

Alright, so seriously. I know all those recipes sound and look amazing. But we couldn’t help ourselves here. When faced with a big bowl of already prepared spaghetti squash after creating this tutorial, we were compelled to write TWO NEW recipes! As our family became accustomed to eating out more often than we usually do while finishing up writing Real Life Paleo, Egg Foo Young at our local Chinese take out restaurant became a favorite. Although it’s gluten-free at our local chain (meaning no soy sauce or flour) it does have cornstarch and is cooked in processed oils. Now with a bit more time on our hands we’re not eating out as much, but boy do we miss those flavorful fried egg patties. Thanks to Matt, we no longer have to miss them at all – while not having those non-paleo yuckies along with them!

We used baby shrimp in ours, mostly because it’s cheap and seafood is a great source of nutrients and Omega 3 fatty acids, but you could use any leftover meat in your own version. Although we got used to eating ours without gravy, traditional Egg Foo Young is served with gravy over fried rice.  We have both of those recipes in Beyond Bacon (and they’re awesome, I might add).  However, if you don’t have our 2nd cookbook (shame on you) we also happen to be big fans of Nom Nom Paleo who has both on her blog including this paleo gravy recipe. Any leftover protein works well, our favorite is actually a "combination" of various types of meat when we don't have shrimp on hand.

And, as if one amazing new recipe and an epic tutorial wasn’t enough, we have an extra bonus recipe too!

As the resident “broth lady” of the paleo community, how could I not include a recipe for classic chicken noodle soup? Matt makes the best soups for me nearly every morning, and this version is one of my favorites. I love the fresh herbs and getting to slurp up the (spaghetti squash) noodles. If you want to know more about why I love broth and how it’s been a huge contributor to helping to heal my gut and manage two autoimmune diseases, check out Stacy’s Soups and Gelatin: Why We Love It. Psst, like our recipes? Then you’ll love our upcoming cookbook Real Life Paleo, where we include several spaghetti squash recipes (like the one below), among the 175 included in the book! 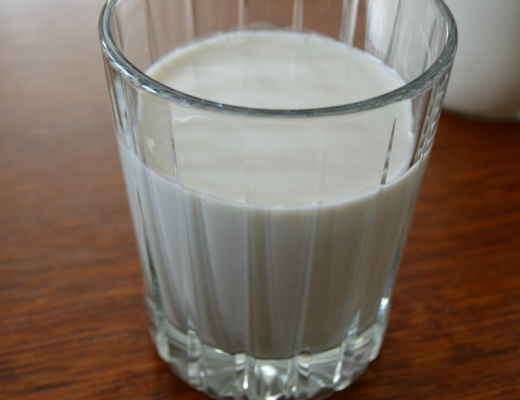 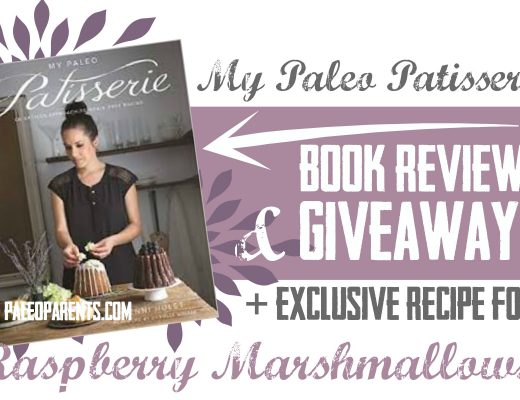 Book Review + Recipe Share from My Paleo Patisserie, plus a GIVEAWAY! 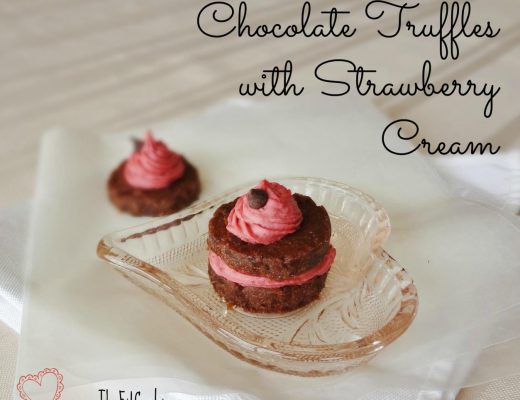