♥  Make sure you read to the end and enter the Giveaway! ♥

As we’ve blogged and podcasted about numerous time, the Paleo Parents family is good friends with George Bryant and Juli Bauer – authors of The Paleo Kitchen (just released today, go get yours!). George came to visit for the release party of Beyond Bacon and stayed a week, quickly becoming beloved Uncle George to the boys. 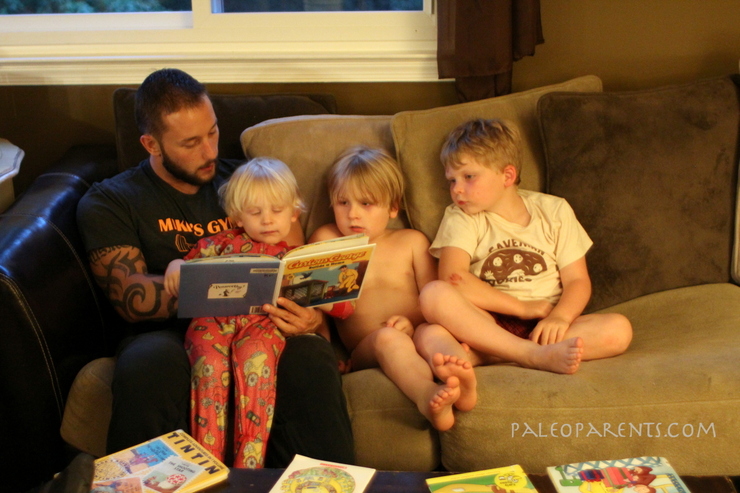 That’s why, it should be no surprise, that when The Paleo Kitchen arrived Wesley shrieked with excitement, instantly pointing to “Uncle George” on the cover.

I told Wesley that this was George’s cookbook and asked him to pick out a recipe for us to try. With great enthusiasm he searched for the pancakes on the cover. However, he’s a 4 year old, whose favorite food group is breakfast breads – so he immediately stopped with adorable satisfaction and excitement when he spotted waffles. And, because I’m currently obsessed with Chicken & Waffles (no, I have no idea why), so that’s what we had. We just baked crispy chicken thighs (recipe for Hissin’ Chicken in Eat Like a Dinosaur) and it was amazing! After discussing this meal with George on The Paleo View, he recommends that you put the chicken, maple syrup and waffles on the same bite while I recommend you eat the waffle with blueberries and whipped cream with chicken on the side. Either way, the consensus is unanimous: this combo is a must and the waffles were tasty!

Later in the week Matt paged through and found their perfect burger recipe with parsnip shoestrings and insisted we try it. obviously. It wasn’t Sunday night, but it sure felt like it with these amazing guacamole burgers from The Paleo Kitchen!

I’ve since sat down and read through The Paleo Kitchen and really enjoyed the writing, as well as the recipes. Juli’s hilarious writing style is still there and George’s photographs make every recipe seem like something that needs to be in your belly. I personally loved reading the story about how they worked together collaborating on this cookbook and found myself laughing out loud as I read… probably a first for a cookbook!

Luckily we were given two copies of The Paleo Kitchen. When our team member Sam, the incredible PaleoSitter, saw us posting about the book and asked to review our 2nd copy because she too (like all of the Paleo-sphere) loves George and Juli! So she and Wes picked out recipes for his lunch one afternoon while Matt worked on writing for Real Life Paleo and then she took it home to review it even further. This book’s recipe have been tested numerous delicious times! My dog Clay is diggin’ The Paleo Kitchen too!

This book is perfect from anyone, from those just starting paleo, to an expert like Stacy and Matt. The Paleo Kitchen has two distinct sections. Starting off the first section, is an in-depth description about Juli and George, the book’s authors. The description includes why they went paleo and their background stories. The main focus of the first section is how to become practical with paleo. They give great explanations of where one can buy fresh, local, and get great deals on ingredients. Not only do they give the explanations, they tell the reader which brands are their favorites and work the best. They guide you on “how to shop smarter” and give you tips on “how to cook smarter”.  Juli and George also provide information on the readers’ tools. Having good cookware is important to creating delicious dishes, like utilizing cast iron.

Instead of using chicken thighs for the Honey Mustard Chicken, I used chicken wings because that’s what we had. They were delicious! The Orange Cream Smoothie was my favorite!

In each subsection there is a wide variety of dishes, from Americanized foods to Asian inspired to traditional recipes. I made 9 of the recipes, and enjoyed every single one.

My favorite recipe was the Fluffy Blueberry Pancakes on the cover, I actually made them 3 times, and will continue to make them. One of my staples to breakfast as I was growing up was pancakes. Being paleo for almost a full year now, I have made renditions of pancakes, but none ever were amazing. That being said, these were AMAZING. The recipe is simple, easy, and quick to make. I also found out you don’t have to even stick with blueberries, for kids (or my stepmom) chocolate chips works well too.

Wesley was just as excited as I was to make more Blueberry Pancakes!
[side note from Stacy: I told you, his favorite food group is Breakfast Breads]

Another recipe that stood out as a favorite was the Slow Cooker Pulled Pork. I made it one evening so I could have it for lunch the next day. I used a 4lb picnic cut (bone in) pork shoulder. I doubled the recipe and let the dry rub sit on it for 3 hours, and stuck it in my Crock-Pot. I let it cook overnight, and it was done in the morning. I shredded the meat and took it to work with me. It was perfect for lunch. It was a little spicy but had a great savory flavor. There were enough leftovers, which we heated it up for breakfast, and put an over easy egg on top. Talk about delectable! Needless to say, I’m Wesley’s favorite babysitter…. it might have something to do with pancakes!

Everything I made was easy and tasty. Wesley, Matt and Stacy’s youngest, helped me make quite a few recipes and enjoyed eating what we made. Overall, whatever stage of Paleo you are in, I would highly recommend this book. 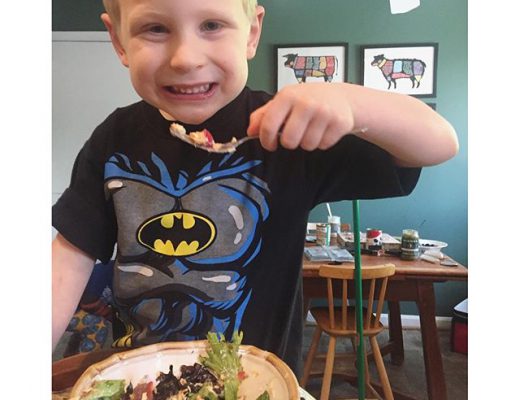 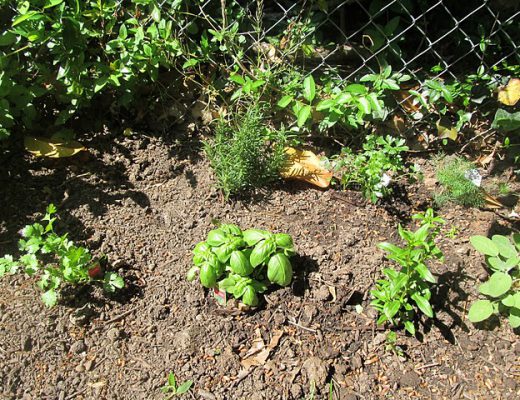 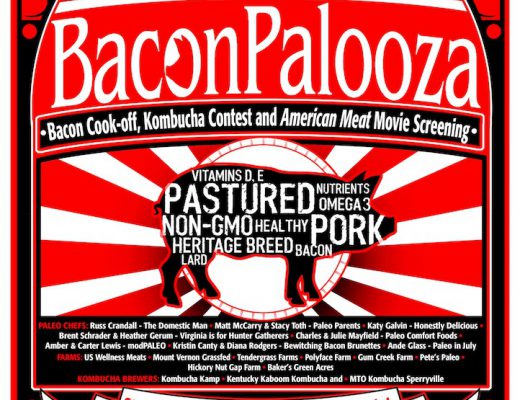