Hello, my name is Matt. You may know me from our modestly visited blog, which I am currently writing for at 8:49PM on a Tuesday night, or perhaps from my reasonably well read cookbook, Eat Like a Dinosaur. Or, maybe you don’t know me. Stacy recently found out during her trip to Austin that many people who are familiar with our blog and other works are not quite aware of, well, my participation. That simultaneously makes me a sad panda and an amused otter. Believe it or not, I am at least 40% of the output of the PaleoParents.com factory. Here is the story of how the sausage gets made.

No doubt about it, Stacy is the face of the blog. If you’re going out to meet the Paleo Parents, chances are you are going to see Stacy and you’ll likely not see me at all. I have a lot of social anxiety that has me conveniently missing a lot of public functions. When Stacy went to Austin, I stayed home. When Stacy presented at a local mom’s club, she took Cole. Heck, I often don’t even attend my own Meat-Ups! Stacy is much more facile with people and loves to hang out with friends. I, on the other hand, prefer to be in the kitchen. We’re like a Paula Abdul video and I’m a jazzy, rapping cat! So what is my role? Well, first of all, I’m the cook. Almost all the recipes are created and written by me (with some notable exceptions, of course). Stacy does most of the more personal, journey stuff and much of the family blogging stuff. But if it’s something that’s failing to make you laugh? Me. I also do some recap stuff. Overall, I’d say the writing load is pretty evenly divided between us.

All the social media is generally handled by Stacy, she runs our Facebook group, our Twitter account, and our Pinterest boards. I was told to take over Google+ but, as you can tell by the lack of activity on there, I’ve resoundingly failed! Keep in mind she does this while working an extremely intensive full time job (this is why often answers to questions on Facebook are brief).

Meanwhile, I generally run the post comments and inbox unless there is a question specifically for Stacy (did you know we sometimes get hundreds a day, and answer them all!). When we have audio visual stuff, I’m handling it (I’ve become nearly competent in my use of Garage Band and iMovie!). If there is a round up or giveaway, Stacy usually is in charge, but often I’ll do the writing.

How this usually begins is with Stacy and her camera.

While I usually cook with the boys in our kitchen, Stacy takes photos. She’s usually the one with an idea for a recipe, and I execute making it. So she’s our director. The best part is when she’ll yell out “PAUSE!” and everyone in the family will freeze in place like some sort of culinary game of red light/green light. She’ll snap the picture of us “in action” while we try really hard not to giggle. Other times, she’ll arrive home with dinner already done, the kitchen already a disaster and be left only with a pretty plate to photograph. 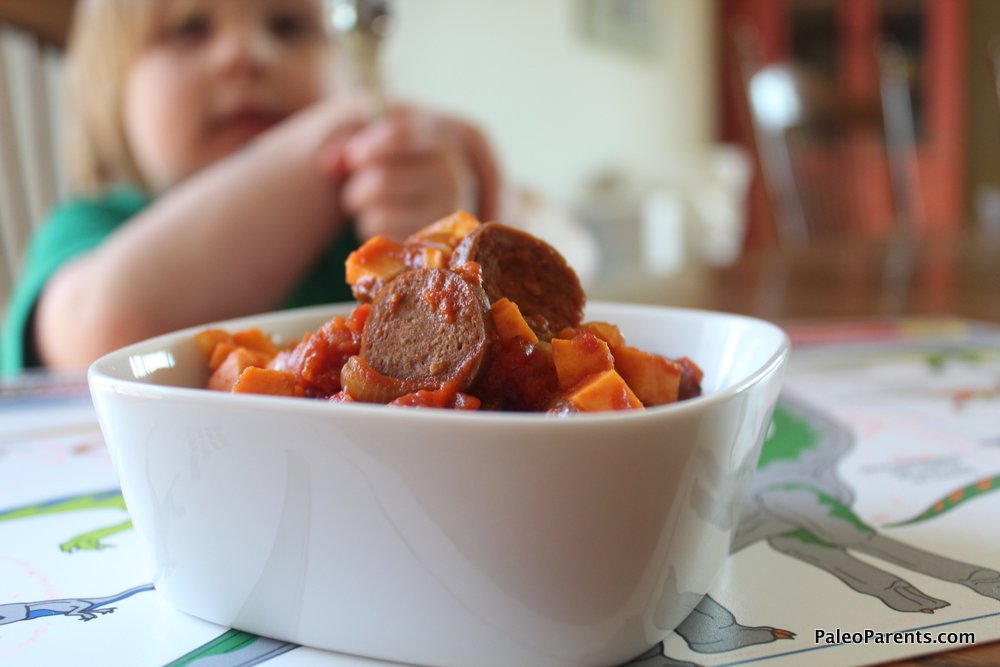 The boys have learned not to eat until mommy takes a picture, so on some evenings you’ll see the boys perched at their plates waiting for the starting pistol to sound. After the boys are to bed, she’ll get on the “big computer” and edit that day’s photographs, culling out the inevitable goofy faces and splattered platters and cropping the spaces that used to contain running children. She gets the benefit of wildlife assisting her in this endeavor, usually. 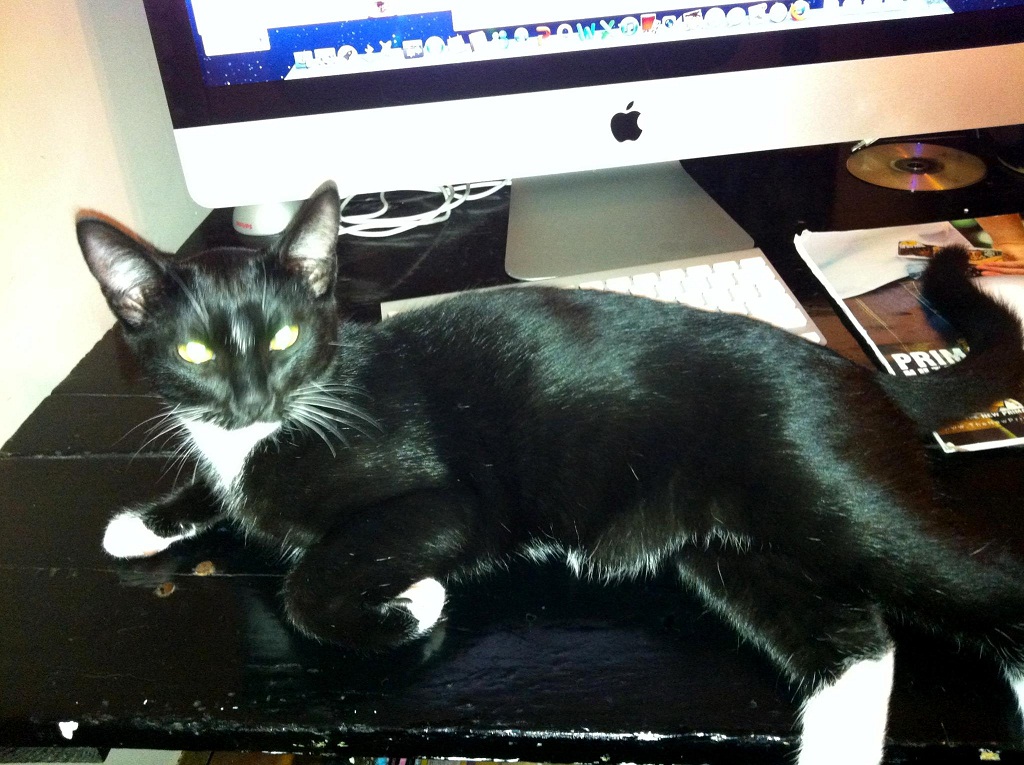 Meanwhile, if it’s a recipe post, I’ll start writing the post on the “little computer”. I’ll insert all the lame jokes, strange pop culture tidbits from the mid-90s, and the most dorky references to Star Wars and Marvel Comics I can pull out. Reading my blog entries is totally like when Wolverine fought Boba Fett at the Pearl Jam concert! Once Stacy’s done with the photos, she’ll load those photos on the site and take out all the lame stuff that I write because, in her words, “No one is going to understand what you’re talking about!”

Thoroughly edited for mainstream appeal, I’ll do all the web geekery stuff for the post that helps people find it if they try to use Google or any other modern day media. Without the SEO data, you don’t have that “summary” of a post when you link on Facebook. So, if you “share” our post – rest assured, I’ve got you covered! Then, I schedule it. Voila! A blog post is born.

On average, it takes about 6 hours for us to complete a post, more if it’s lengthy. Often, Stacy does the photo editing on the weekend so that she doesn’t have to worry about it during the week. Then I blog while the boys nap or in the evening.

Not only is this the typical pattern of our blogging, but it’s also how we wrote the book as well. Although back then, we didn’t have fancy computers or a nice camera! The first pass through most of the book was me. Stacy then completely rewrote and edited before I took a final stab at it. Meanwhile, Stacy and Amanda did all the design of the book and agonized over what the most perfect choice would be on every page before we turned in the manuscript and design templates to our publisher. Stacy, you see, is a perfectionist; I still catch her obsessing about tiny errors that have slipped through the cracks!

Often times people ask us how to grow their blog. Really, it’s all about hard work. And shameless self-promotion just below the point of obnoxiousness. But mostly hard work. In the beginning, we tried to put our work in front of as many eyes as possible, participating in blogging round ups, and on recipe sharing sites (Chowstalker was our first, then Dessertstalker opened and FastPaleo and Foodee shortly followed).

We also had a number of fortunate breaks along the way. Stacy found and befriended Shirley of GFE from her What Losing 100lbs Feels Like post. This led her to gain enough confidence to invite Liz of CaveGirlEats over for dinner. Liz then introduced us to B&H from Primal-Palate and forced us to contact a publisher about our book. After that, the Twitter and Facebook friendships grew – Stacy then attended Diane’s Seminar and met the genius behind BalancedBites. Big names in the community wanted to help with the book, and we became more stupefied everyday.

Then, our 2 part video interview with Richard at Free the Animal was a big catapult into a larger audience. Getting our 200 pound lost post and How to Keep Your Paleo Family Out of the Poorhouse to go slightly viral on Facebook and Reddit was also a big deal. Really, though, the best thing Stacy did was to be herself and start meeting people. The friendships we’ve made through this blog have been both surprising and inspiring in a complete Wayne-and-Garth-Meeting-Alice-Cooper “We’re not worthy” experience!

Anyway, if you were curious as to how this blog works, that’s how! If you weren’t curious, how about an awkward photo to sooth your discomfort from this post? Here’s what I look like at 11:28PM on a Tuesday night (yes, I’m wearing a geeky t-shirt – that’s my uniform) while writing the thing! Finally, a question for you. For the past few weeks we’ve tried an experiment with guest posts every Wednesday. We hope you enjoyed reading different voices with different information and points of view. We’re thinking about making that a regular Wednesday feature. It is our hope that this will accomplish several things:

I think everyone wins here! So, I hope this plan excites you because it’s really exciting me! In a completely chaste way!

And now that I’ve blogged, I can go to bed. Hey, would you look at that! It’s 11:44 PM so I’m going to be in bed before midnight! Stacy’s work will begin tomorrow morning before work, when she’ll edit this post, massage my jokes, add a bunch of links and include more photos, making it much more palatable for you all!

No really, what do your kids eat? 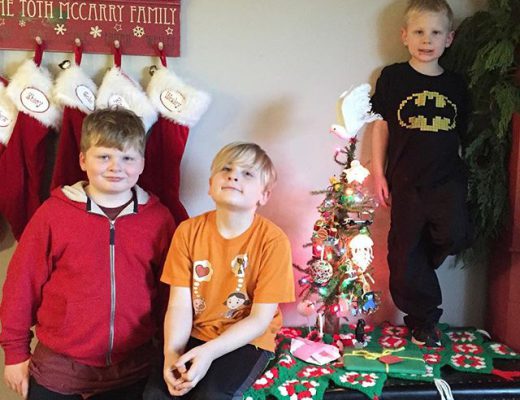 All About Our Paleo Holiday Celebration, Including Our Christmas Tree Disaster! 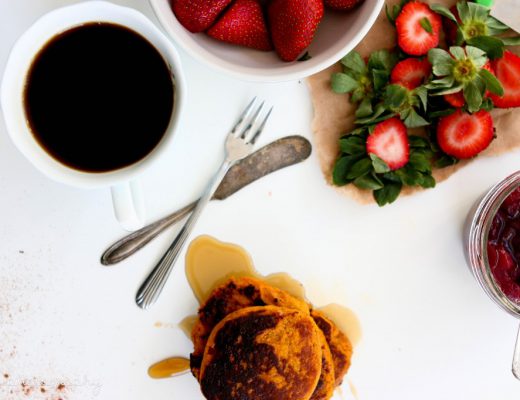